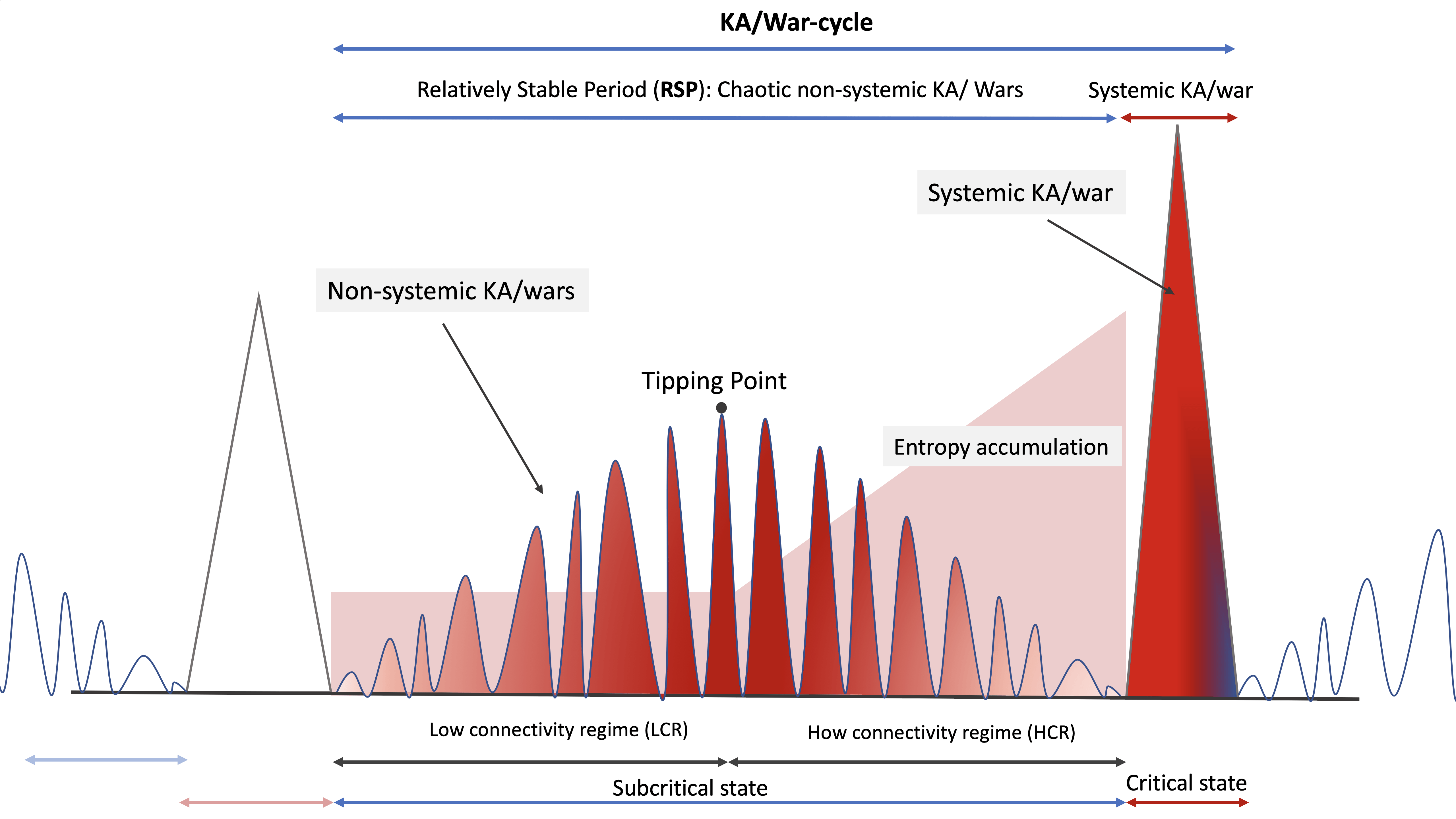 KA stands for “kinetic activity” of the System, and is equivalent with war. Analysis of war data shows that during the transient period (1480-1945), the System produced four accelerating KA/war-cycles, each cycle consisting of a relatively stable period (RSP) – when through non-systemic KA/wars a dynamic steady state (a certain order) was maintained – followed by a relatively short critical period, when through systemic KA – a systemic war – the order of the System was ‘upgraded’ (again), to a next level of organization. These accelerating cycles accompanied the 1st FTS (1480-1945), a dissipative structure that emerged in 1480, when the System was driven far from equilibrium. The 1st FTS was instrumental in a phase transition of the System.

The purpose of non-systemic KA/wars was (and still is) to maintain the existing order (dynamic steady state), to ensure continuity, while the purpose of systemic KA/wars is to accomplish change. The 1st FTS balanced continuity and change in the (State-)System, in accordance with the demands of the Second Law and related principles FFE.

The KA – war dynamics – of the System were remarkably regular, and – as far as systemic KA/wars are concerned – highly predictable, at least during the period 1480-1945.

The KA – the war dynamics – the System produced during the period 1480-1945, qualify as a punctuated equilibrium dynamic: Relatively stable dynamic steady states were periodically punctuated by systemic KA/wars, when fundamental changes were implemented.

Entropy-production – and the need to regulate entropy to ensure a certain order, also through KA/war – was the driver of the FTS.

The accumulating entropy – and the percolation of entropy in the (State-)System – then drives the System toward a critical state, when the System in response to the accumulated issues and tensions (entropy), produces systemic KA; a systemic war.

KA/war-cycles and the fundamental differences between non-systemic and systemic KA/wars.

Schematic representation of a KA/war-cycle. During the transient period (1480-1945), the 1st FTS was accompanied by four accelerating KA/war-cycles, each cycle consisting of a RSP and a critical period, when (regulated by the 1st FTS) the (State- System produced respectively non-systemic KA/wars (to ensure continuity) and systemic KA/war (to ensure change). Once the tipping point of a cycle was reached, non-systemic KA/wars decreased, and entropy (issues and tensions) started accumulating in the System.

Source: On the Thermodynamics of War and Social Evolution, chapter 5.

During the period 1480-1945, the System – with Europe as its core – has produced four accelerating KA/war-cycles. These KA/war-cycles were instrumental in the accomplishment of a phase transition that resulted in the unification (integration) of Europe, and the globalization of the System (from an Europe-centric to a global system).

Presently, the (now global) System is in the last stage of the first KA/war-cycle of the globalized System (1945-….), that will contribute to the eventual unification (integration) of the global System.