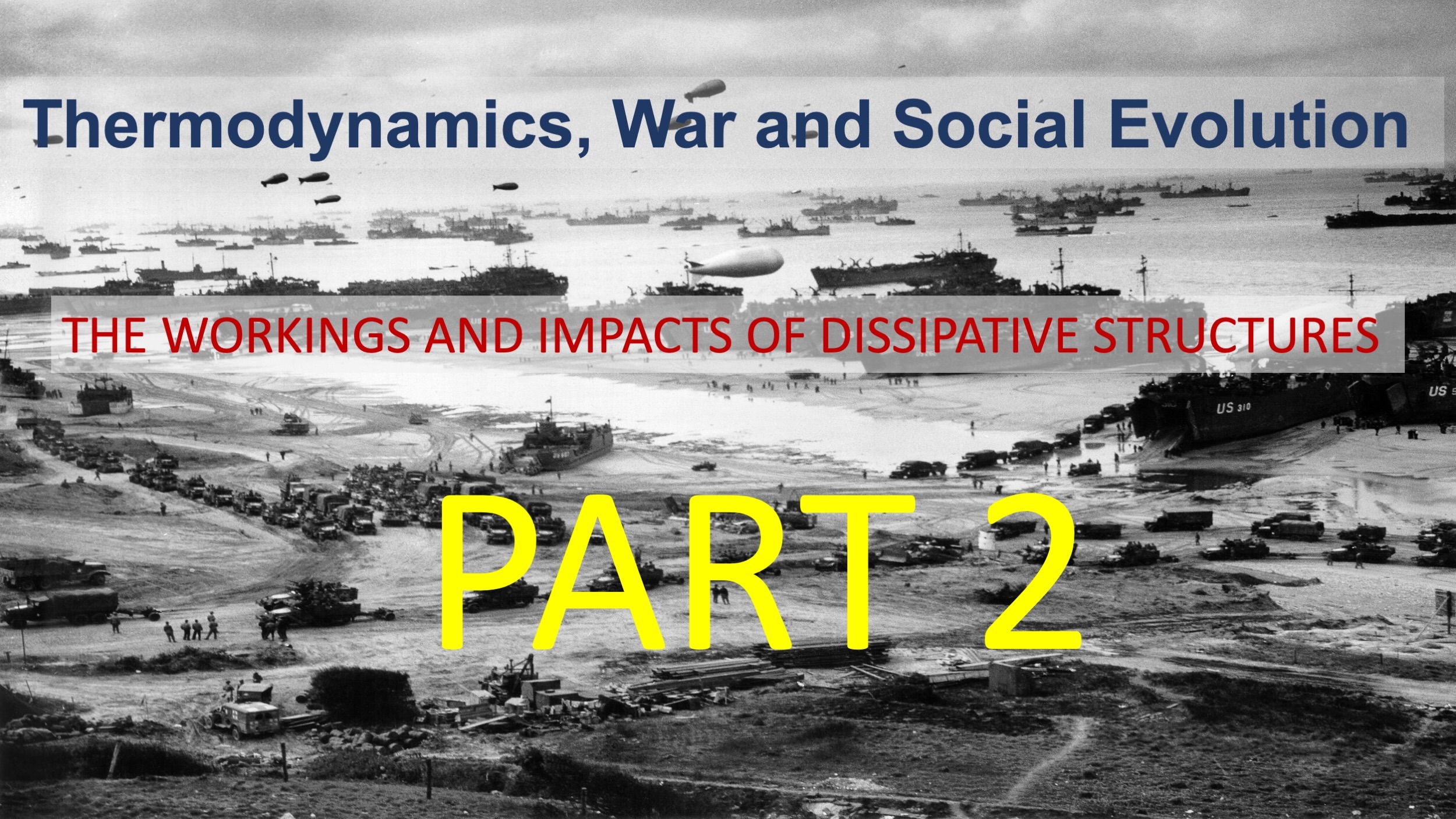 The research shows that a series of closely related patterns can be identified in the available data concerning Great Power wars, and that these patterns are consistent with laws of physics and related principles.

The fact that these patterns have not been identified at an earlier stage, can be attributed tot the (limited) research methods and perspectives that were applied until now.

The research shows, (see figure 2), that during the period 1480-1945, the System, produced four accelerating war-cycles that accompanied the first dissipative structure. Each cycle had an identical structure (see figure 3): In each case, a relatively stable period (RSP), during which only relatively small non-systemic wars were produced, was always followed by a systemic war, that involved all Great Powers present in the System.

Figure 2: Four accelerating war-cycles accompanied the first dissipative structure, during the period 1480-1945. Data-analysis shows that the System (with Europa as its core) produced four accelerating war-cycles, during the period 1480-1945. These cycles accompanied the first dissipative structure and were instrumental in a phase-transition in the core to thermodynamic equilibrium, accomplished in 1945.

Figure 3: Schematic representation of a war-cycle. A war-cycle has a typical structure and sequence: A RSP – during which tensions are regulated by non-systemic wars (non-systemic kinetic activity) to maintain the existing order – is always followed by a critical period during which a systemic war (systemic kinetic activity) is produced to interactively and collectively design and implement an upgraded order, which enables a new/next RSP.

During LCR’s, issues and tensions can still be effectively regulated through non-systemic wars, however, once the tipping point is reached – and the cycle is in its HCR – de effectiveness of non-systemic wars is increasingly limited. Consequently, issues and tensions accumulate in the System, reinforce each other and start an autocatalytic process, which causes the System to become critical.

During the critical period, the correlation length of vulnerable clusters (consisting of issues, tensions and states that are involved) is typically one (connected vulnerable clusters span the System); in such a state the System is highly susceptible for incidents that can under those conditions cascade (reverberate) through the System; a correlation length of one, enables system-wide communication (including of tensions) and coordination. The System ‘uses’ these typical characteristics of a critical condition to interactively design and implement an upgraded order that necessarily requires the involvement of all Great Powers and must encompass the whole System.

Analysis also shows that 1939 was the critical point of the dissipative structure, and its structural manifestation, the European state system.

In 1939, this structure reached its critical point, and was no longer viable. Consequently, through the fourth systemic war (the Second World War, 1939-1945), the core self-destructed and collapsed. The last systemic war produced by the first dissipative structure can be considered an “infinity war”, because at that point (1939), the core produced “infinite” amounts of entropy, and in response “infinite” kinetic activity.

The eventual result was a “vacuum”, that was then “filled” by two non-core Great Powers, the United States and the Soviet-Union. This process was part of – the final step in – the globalization of the state-system (from a European state-system to a global state-system). From this perspective, a better name for the Second World War would have been the “Globalization War”.

In my research, I point to this process as (a process of) kinetic growth. Despite its destructive nature – in fact, because of its destructive nature – this is a highly functional process: At the critical point (1939-1945), the fully developed non-core (which was also produced by the first dissipative structure), filled the vacuum that was created through the self-destruction of the core (Europe), which then reached thermodynamic equilibrium. At the same time, the System was scaled up to a global state-system, which was then (and still is) regulated by a second – global – dissipative structure, that now pushes the global state-system to thermodynamic equilibrium (a process that is still in progress).

During the period 1480-1945 – which constitutes a transition period – the characteristics/properties of the four successive cycles, developed as follows (see also figure 4):

•          The life-span of successive cycles decreased to near zero years (this development points to the increasing fragility of successive orders/RSP’s);

•          The number of non-systemic wars and the non-systemic war-frequency decreased linearly to zero (this development points to the increasing robustness of successive orders/RSP’s);

•          De Great Power status dynamics decreased linearly to zero (this is indicative for the decreasing entropy of the European state-system);

•          The frequency of war-cycles increased exponentially (which also points to the dissipative and European state-structure’s collapse).

The development of quantitative characteristics points to the presence of a singularity in finite-time, of the first dissipative structure and the European state-system, in 1939; consequently, collapse was unavoidable. What is remarkable, the critical point and collapse of the state-system, were already contained in the (dynamics of) the dissipative structure at its inception in 1480.

The remarkable consistency of the development of these characteristics, can be explained from a thermodynamic perspective.

As I mentioned, the first dissipative structure and the European state-system reached in 1939 a critical point, a singularity in finite-time, when the core produced so to speak “infinite” amounts of entropy and kinetic activity, while its regulatory capabilities were no longer effective (e.g. regulation through non-systemic kinetic activity); collapse was consequently unavoidable.

The typical dynamic I described, is in accordance with the laws of thermodynamics and related principles, applicable to far-from-equilibrium systems (as I explain in the next paragraph in more detail).

The phase transition had two closely related and complimentary effects: (1) The accomplishment of thermodynamic equilibrium in the core (the eradication of the European state-system), which allowed for the unification of Europe, and (2) the simultaneous globalization of the state-system, and an end to the subjugation of non-core states and societies by the core (European states).

Below figure (figure 5), shows that during the period 1480-1945, not only certain quantitative characteristics developed very regularly, but also several (more) qualitative properties, including the metastability – the level of order – of successive RSP’s of war-cycles.

In complexity science, the typical development of the European state-system is sometimes referred to as increasingly robust yet fragile. Robust yet fragile points (in this particular case) to the phenomenon that while successive RSP’s (orders) became increasingly more robust (the number and non-systemic war-frequency decrease, showing that incidents could be increasingly absorbed without the state-system producing kinetic responses), at the same time, the fragility of the state-system increased at the same time (as the decreasing life-span of cycles shows). Robustness and fragility are two sides of the same coin; the phenomenon can also be observed in ecosystems.