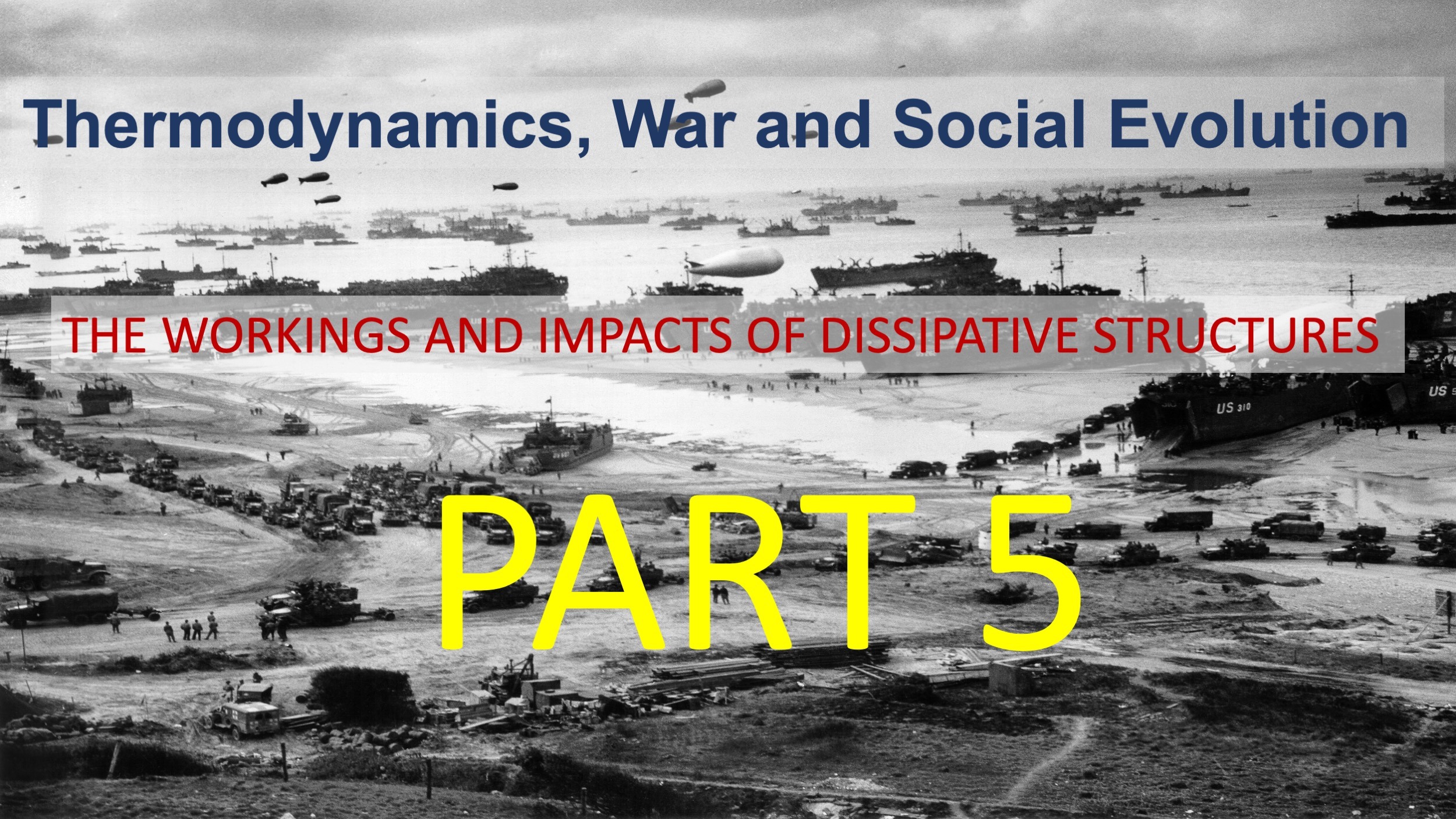 The meaning and implications of this research are far-reaching: laws of physics and related principles determine and shape social dynamics and structures; there is no escaping.

This research also shows that our “free will” is much more limited than we (want to) belief. We blindly obey the laws of physics, and we are always able to rationalize and justify (in the social context we create) our behavior.

Social systems – we – are products of the System, and the laws and principles that govern it. Through sensemaking, conditioning, socialization, institutionalization (including of thermodynamic principles) our fit is always ensured. In dynamical systems the interacting self-fulfilling prophecy-mechanism, ensures we coordinate our behaviors and responses (see figure 11).

The process of integration in/of the core (Europe 1480-1945), the process of expansion of the core to the non-core, the process of empowerment, and kinetic activity, were generated and shaped by the first dissipative structure, and were instrumental in the accomplishment of a phase transition with two effects, as discussed. The phase transition resulted in thermodynamic equilibrium in the core, albeit the second exceptional period (1945–1945) caused a delay.

The thermodynamic equilibrium that was achieved in the core – the eradication of the European state-system through kinetic growth – (still) provides the fundament for the process of European unification; a process that is still in progress, but increasingly vulnerable.

The second dissipative structure (which works at a global scale), in combination with chaotic war dynamics at a global scale (since 1989) – and the fact that the System is now in the HCR of the current cycle – have the effect of a centrifugal force that tears the (still) fragile political structures in the erstwhile core, apart. This explains the fragmentation that can now be observed.

A directed force – applied by the first dissipative structure during the period 1480-1945 – is now (since 1989) replaced by a centrifugal force, that puts Europe’s fragile structures to the test.

As I mentioned, data-analysis shows that the System is now in the HCR of the first cycle (1945-….), of the second dissipative structure: Non-systemic wars are now less and less effective to regulate tensions (entropy); instead issues and tensions accumulate in the System, become increasingly connected and reinforce each other.

These accumulating issues, tensions and related states form vulnerable clusters that increasingly percolate the System, until the networks they form span the System (and have a correlation length of one) and cause the System to become critical. Criticality the four preceding cycles (1480-1945) show, is just a matter of time.

Like its predecessors, a next systemic war will be instrumental in the reorganization of the state-system – an upgrade of the order – that will then enable a next RSP.

This research shows that social and political scientists, and historians, must adjust their research methods. The processes and events they want to understand cannot be explained as long as the “underlying” laws of physics – that also apply to social systems – are ignored. There is an interplay between social processes, social evolution, and thermodynamic laws and principles that apply. This interplay must be taken into account.

A concrete example: Historians mostly attribute the Second World War (which is in fact the fourth systemic war that was produced by the first dissipative structure) to several unique events, developments, protagonists (“historical circumstances’).

This research shows that this is misrepresentation, and that a Second World War – a fourth systemic war – was like its three predecessors highly predictable, the moment the System experienced a bifurcation in 1480 and consequently produced a first dissipative structure.

The Second World War we now know – and which is extensively described in history books – is “only” the version the System has produced through the interplay between the laws of physics and certain social issues, and contingent factors and conditions, at the time. Other versions would have been possible. A Second World War was – like its predecessors – unavoidable and was intrinsic to the System.

Other versions were possible – would have been “allowed” – as long as these versions would not conflict with the laws of physics and related principles. This latitude for social dynamics, I refer to as the contingent latitude of the System (and which is a function of the level of entropy of/in the System). The contingent latitude determines the possibilities that are available and how the available entropy (tensions) can serve as a source of order.

The increasingly limited contingent latitude that is now available, we must learn to use more wisely. For its regulation, the second dissipative structure is also highly dependent on kinetic activity. To escape this (now) global war trap, we must make fundamental changes.