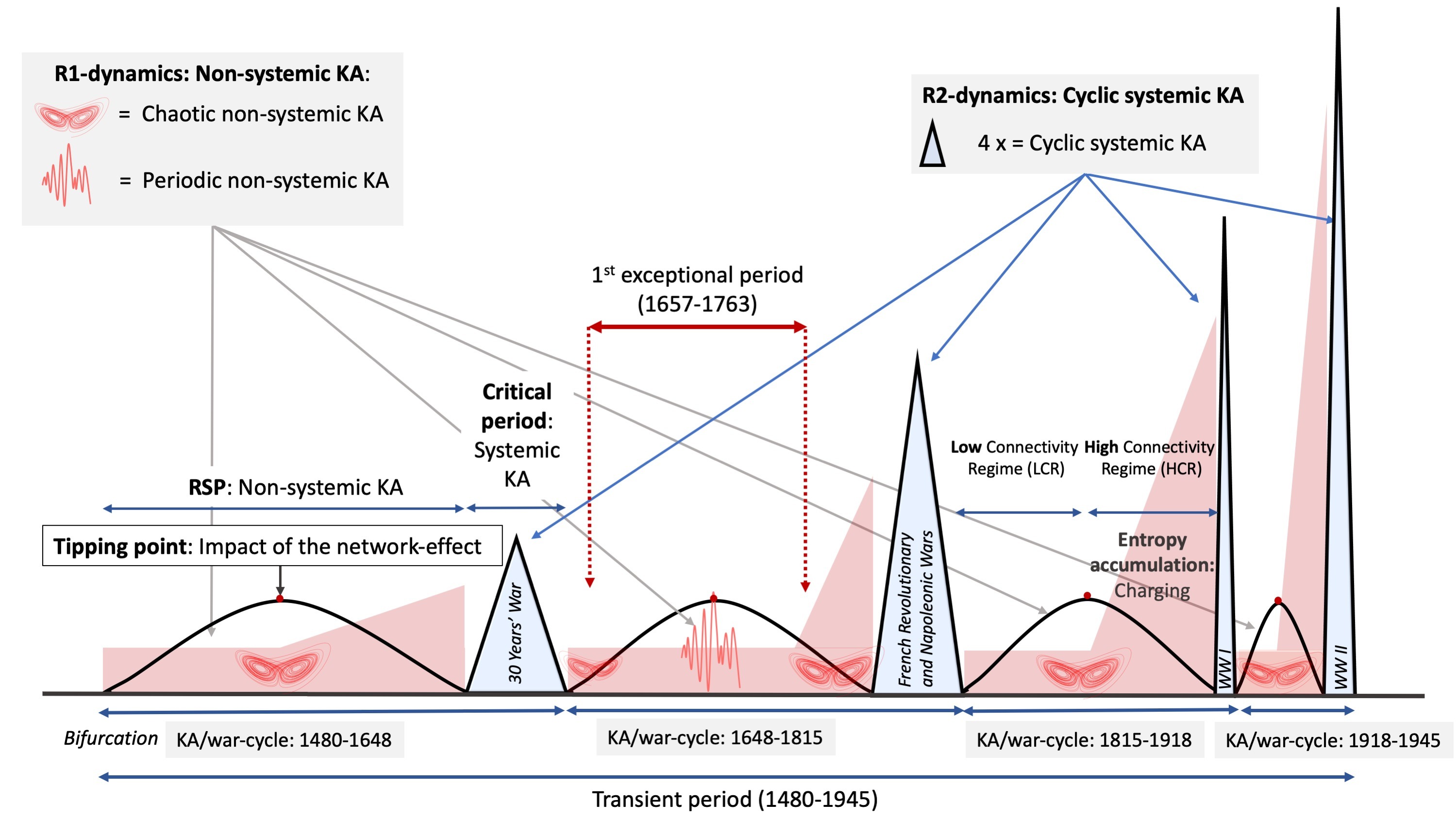 A gradient can be understood as a “slope”. The gradient of a graph or series of measurements is the rate at which one set of amounts changes in relation to another. A temperature gradient for example, “is a physical quantity that describes in which direction and at what rate the temperature changes the most rapidly around a particular location. The temperature gradient is a dimensional quantity expressed in units of degrees (on a particular temperature scale) per unit time. The SI unit is kelvin per second (K/s). It can be found in the formula for dQ/dt, the rate of heat transfer per second”.

It is possible to define gradients for various properties and quantities.

In case of the System and dissipative structures it produces, the presence of entropy gradients to a significant extent determine their dynamics, including the kinetic activity (KA, war-dynamics) of the System.

In case of the presence of a gradient, the system concerned has the natural tendency to neutralize this gradient and restore equilibrium. This tendency also explains the drive of the System to thermodynamic equilibrium.

In 1480, the moment Europe, became sufficiently connected, consequently constituted a system, and was “pushed” sufficiently far-from-equilibrium, a (first) dissipative structure emerged through a bifurcation. From that moment onwards, this dissipative structure regulated EMIS-production and flows (including kinetic activity of the System) and ensured that the System would achieve thermodynamic equilibrium via the most efficient path (EMIS is an abbreviation of Energy (E), Matter (M), Information (I) and entropy (S)).

Social developments – including the kinetic activity (war-dynamics) of the System – became subject to the “demands” of the dissipative structure.

A dissipative structure can be understood as a coherent set of sustained gradients.

The “trick” of the dissipative structure is that it maintains a certain coherence (including of the System, which is its structural manifestation) while it fulfills its (thermodynamic) purpose (as is also for example the case with hurricanes, which are also dissipative structures). This requires the regulation of EMIS-production and flows.

Other requirements/conditions must also be fulfilled, including: (1) Sufficient entropy production, (2) sustainment of a state far-from-equilibrium, (3) sustainment of EMIS-exchanges with a suitable environment, and (4) maintenance of mode-coupling; Then the dissipative structure will run its course via the most efficiënt path to a state of thermodynamic equilibrium.

During the transient period (1480-1945), this was the case; the (first) dissipative structure constituted a self-reinforced dynamic structure, that propelled the System to thermodynamic equilibrium. Its operation was highly efficient, as data-analysis shows.

During the transient period (1480-1945), the core (Europe) was pushed toward thermodynamic equilibrium, which required the eradication of state-structures (which constitute gradients), while the core (Europe) simultaneously expanded to the non-core (colonization).

Following the fourth (and last) systemic KA/war (better known as the Second World war, 1939-1945) and thermodynamic equilibrium was achieved in the core (Europe), the System was “scaled up” to a global System, the subjugation of the non-core by the core came to an end, and the core and non-core integrated into the (now) global (state-)System (1945-….), on the basis of equivalence (at least from a system-perspective).

The moment the System globalized (1945), a second – now global – dissipative structure emerged, which became fully operational in 1989, when mode-coupling (at a global scale) was established.