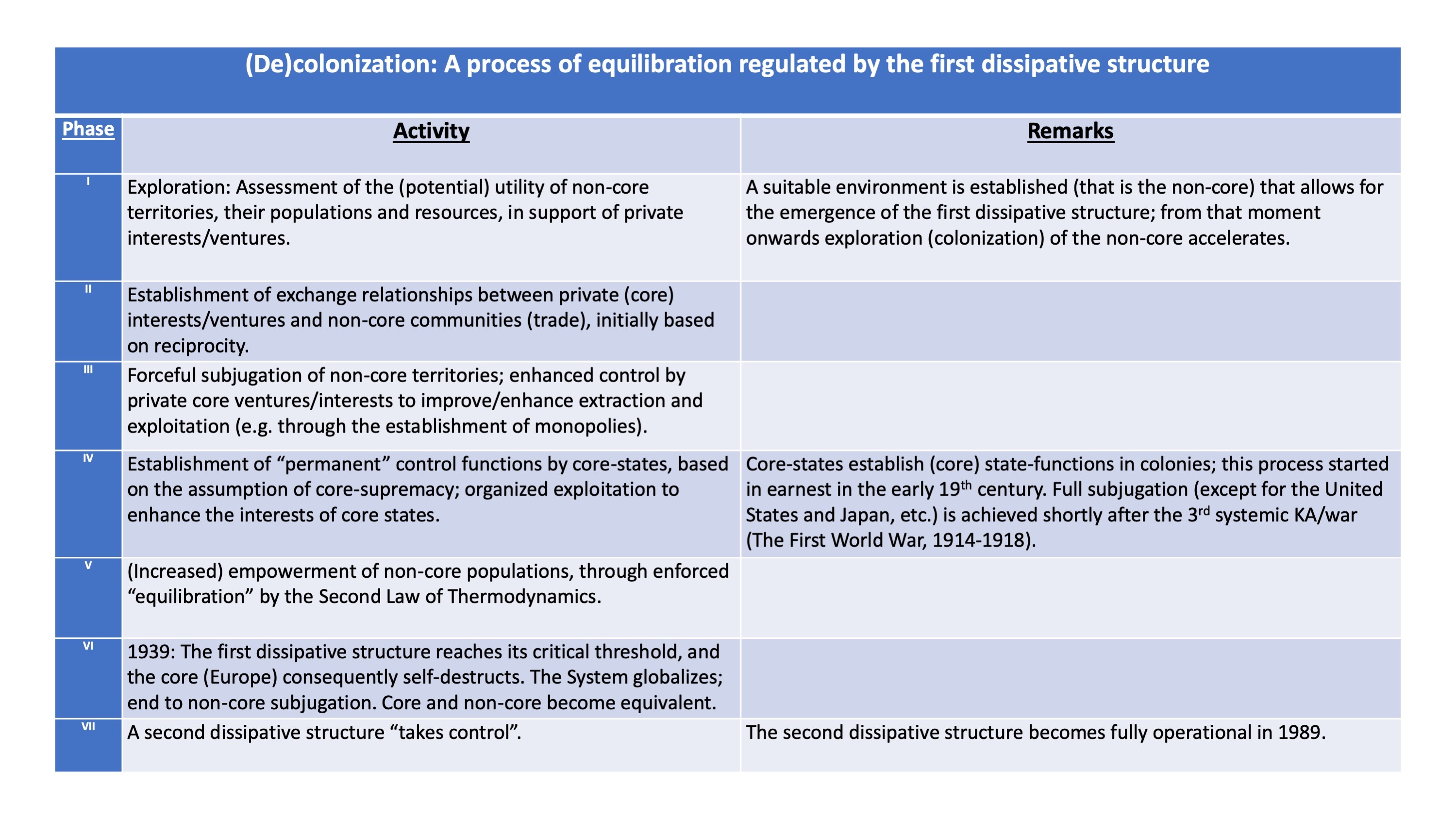 In this article, I discuss some (initial) thoughts on the process of colonization and decolonization. These processes can be better understood when the thermodynamics of the System – especially the effects of the 1st dissipative structure (1480-1945) – are taken into consideration.

During this period, global exponential population growth when hand in hand (so to speak) with the “proliferation” of European individuals, groups and related interests to no-core territories. As I explain in my research, during the period 1480-1945, the System consisted of a core (Europe) and a non-core (“the rest of the World”).

This process of proliferation of individuals and groups from core-states (European states) to the non-core, was an integral “part” (supporting subprocess) of the dissipative structure that had emerged in 1480.

This (first) dissipative structure contributed to the phase transition the System experienced during the (transient) period from 1480 until 1945. This phase transition was instrumental in the achievement of thermodynamic equilibrium in the core (Europe), and the globalization of the System (in 1945).

The (sub)process of proliferation (as described above) helped sustain the dissipate structure in the core (that was also responsible for the production of four accelerating KA/war-cycles in the core (Europe)).

However, the process of proliferation of individuals, groups and the interests they represented (or came to represent), did not involve large numbers of individuals, but their number was large enough, to establish control over non-core territories, their populations and resources.

It was just a matter of time before entropy- and energy-flows (respectively from the core to the non-core, and vice versa) were also reversed: Entropy “autonomously” produced in the non-core (tensions in the non-core) – e.g. through rivalries between core-states concerning control over non-core territories – was imported into the core (and fueled tensions between states in Europe), and core states could develop markets in the non-core for products that were produced in Europe. These developments signal (from a thermodynamics point of view) that the core and non-core established – at least to a degree – reciprocal processes.

Subjugated non-core territories were exploited by core-states to support their (specific) interests. During the process of state-formation in the core, on citizens of these respective states certain obligations were imposed (e.g. the obligation to pay tax, conscription) that were at a later stage “compensated” with certain rights (e.g. suffrage, a voice in the affairs of the state). Such a process of “balancing” did not take place in subjugated non-core territories (colonies), and if this happened, it was very reluctantly.

However, it was a matter of time that through the exchange of information – through interactions between core and non-core individuals, groups and interests) – non-core populations became aware of the injustice of these arrangements. Despite core-states and their interests deployed various ideologies (including religions) to justify these arrangements, they could eventually not be sustained. The correction that were eventually made, can also be understood as an effect of the Second Law of Thermodynamics: This law will always ensure that equilibrium is restored.

Decolonization – an end to non-core subjugation by the core (Europe) – was unavoidable, the moment the dissipative structure reached a critical threshold in 1939 and consequently produced infinite amounts of entropy (tensions) and kinetic activity (KA). The core (Europe) self-destructed, and non-core states could acquire control over the (power) vacuum that was created in the process.

As I mentioned, the Second Law of Thermodynamics played an important role in these processes, and how they were shaped. The Second Law always ensures that thermodynamic equilibrium is (eventually) established. To maintain a certain (degree of) order (organization, structure), in a state far-from-equilibrium, entropy is required as a source of (new) order, and energy to accomplish “work”. The order of the System during the period 1480-1945, was accomplished through the first dissipative structure; the dissipative structure ensured that EMIS-flows (flows of energy, matter, information and entropy) were always optimized, in accordance with the laws of thermodynamics and related principles that apply far-from-equilibrium.

In fact, through the first dissipative structure (1480-1945), the Second Law brought the (now global) system closer to thermodynamic equilibrium at a global scale of the System. This state – the predictable end-state of the System, the Second Law will ensure – lays still in the future (if the current dynamics are extrapolated, around the year 2150). The second (global) dissipative structure, that became fully operational in 1989 (when the Soviet Union collapsed, and mode-coupling was restored), will be instrumental in this process. Relevant questions are – given the requirement for an environment for a dissipative structure to export (dump) entropy and extract energy – what environment(s) can fulfill this function.

The process of equilibration described in this article and kinetic activity of the System – both imposed by the Second Law – manifest themselves respectively as processes of (de)colonization and war. This raises an intriguing question: Are we – humans – just loyal “accommodators” of the Second Law, or do we really initiate these processes? Our strength is also our weakness: We have an enormous ability for self-deception and self-justification. We think we are in control, but we are (still) not.