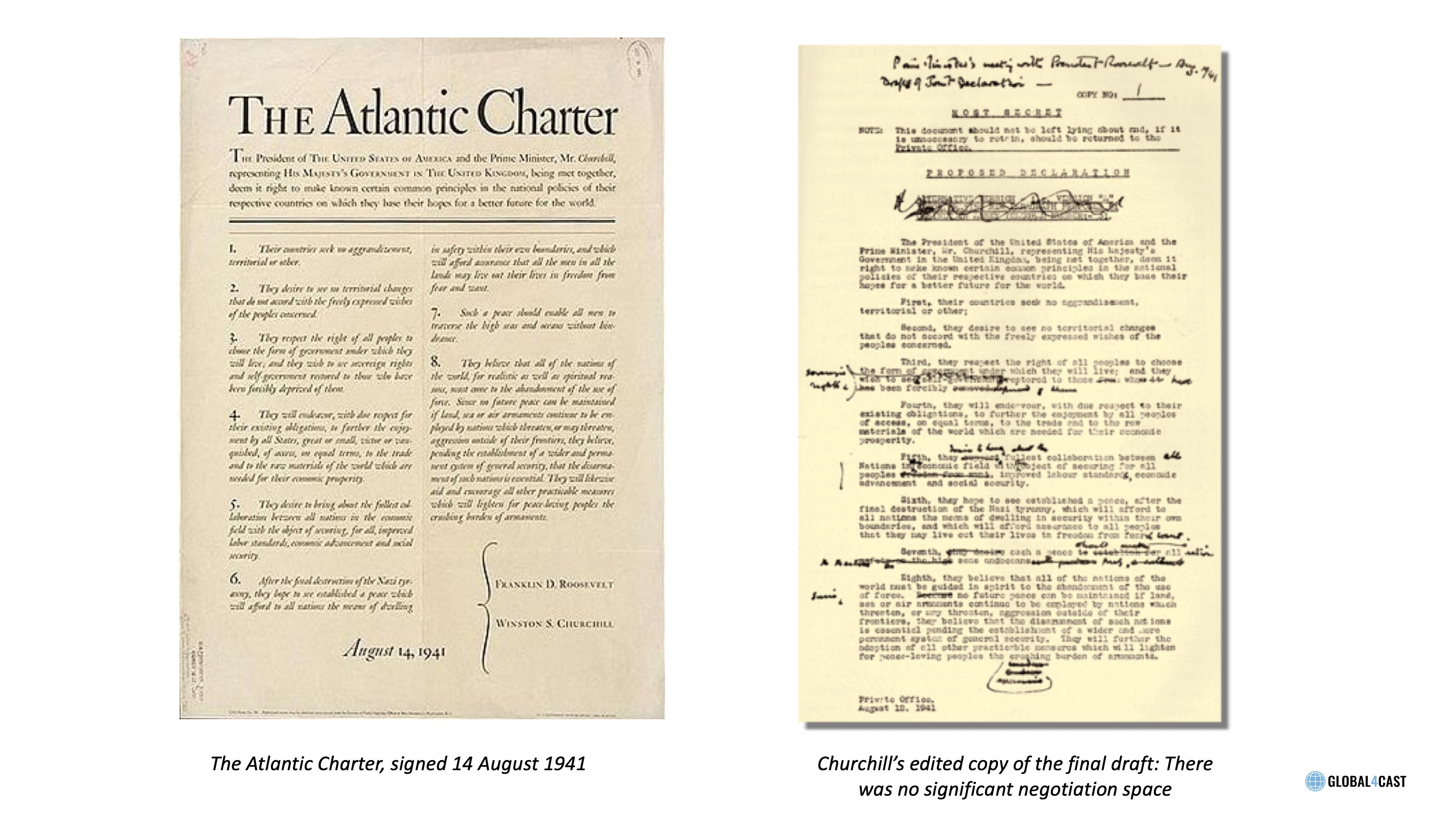 In a series of articles, I discuss several subjects related to a next systemic war, including: How systemic wars “work”, the function of privileges for Great Powers and the System, and what we should fight for in the next systemic war.

In this article I discuss how systemic wars “work”.

Periodically – and during the period 1480-1945 with remarkable regularity – the System produces systemic wars. The purpose of these types of war is to “upgrade” the international order and ensure a new period of relative stability.

These four wars produced relatively stable periods, during which tensions (entropy) could be regulated with non-systemic wars, to maintain the status quo, at the time.

The Second World War (the fourth systemic war), produced the first international order – the United Nations – at a global scale of the System.

Based on the typical behavior of the (European) System during the period 1480-1945, and analysis of war-data, it is possible to determine that the System could produce a next systemic war around 2020 +/- two years.

The anarchistic International System still lacks a mechanism (like functioning states) to upgrade – reorganize – itself, without resorting to war (kinetic activity).

Presently, the System is in the last stage of the first (global) war-cycle, analysis suggests.

Systemic wars are a result of the accumulation of tensions (entropy) during the preceding relatively stable period: At a certain point – when the tipping point of the war-cycle is reached – non-systemic wars become increasingly ineffective in regulating tensions and solving issues. Data-analysis shows that the System reached its tipping point in 2011.

As I explained in my research, the (ongoing) accumulation of tensions – and inability to regulate them – causes political and social volatility, including a drastic increase in terrorist activity that started in 2011.

This is no “coincidence” and symptomatic for the state of the international order, at this stage of development of the current war-cycle.

Once the war-cycle has reached the tipping point, the System is “charging” – so to speak – until the System becomes critical. This process of “charging” includes the “preparation” of states and societies for war. The issues and tensions that are generated and constantly reinforced, contain the justification to apply military capabilities. We are “prepped” for war, during this phase.

Typically, in case of systemic wars, the System is in a critical state, and all Great Powers are involved. Their involvement in a systemic war ensures – and is required – to enable a system-wide upgrade: All Great Powers must be “on board” to create a new balance.

In case of criticality, so-called vulnerable clusters (networks of states, issues and tensions) have percolated the System, and the correlation length of these clusters is “one” (they span the System). These properties facilitate system-wide (global) communication; a prerequisite to establish a new order, that concerns the whole System.

How does this – the interactive design and implementation of a new order through war (kinetic activity, KA) – work in practice; in the “real” world as we know it?

Great Powers – supported by their respective allies – fight each other and try to impose their “will”. Systemic wars are a form of “kinetic” bargaining; the design of the new order is at stake.

The Second World War (the fourth systemic war, 1939-1945), was instrumental in the design and implementation of the United Nations (UN) international order and is a good example of the process that takes place.

The Atlantic Charter played a crucial role in this bargaining process, and in the establishment of a new order (the United Nations).

“US President, Franklin D. Roosevelt, and British Prime Minister, Winston Churchill, discussed what would become the Atlantic Charter in 1941 during the Atlantic Conference in Placentia Bay, Newfoundland. They made their joint declaration on 14 August 1941 from the US naval base in the bay, Naval Base Argentia, that had recently been leased from Britain as part of a deal that saw the US give 50 surplus destroyers to the UK for use against German U-boats (the US did not enter the war as a combatant until the attack on Pearl Harbour, four months later). The policy was issued as a statement; as such there was no formal, legal document entitled “The Atlantic Charter” (Source: Wikipedia). It detailed the goals and aims of the Allied powers concerning the war and the post-war world.”

“The joint statement, later dubbed the Atlantic Charter, outlined US and UK aims for the world as follows: no territorial aggrandizement; no territorial changes made against the wishes of the people (self-determination); restoration of self-government to those deprived of it; reduction of trade restrictions; global cooperation to secure better economic and social conditions for all; freedom from fear and want; freedom of the seas; and abandonment of the use of force, as well as disarmament of aggressor nations. Adherents to the Atlantic Charter signed the Declaration by United Nations on 1 January 1942, which was the basis for the modern United Nations. The Atlantic Charter inspired several other international agreements and events that followed the end of the war: the dismantling of the British Empire, the formation of NATO, and the General Agreement on Tariffs and Trade (GATT) all derive from the Atlantic Charter.” (Source: Wikipedia).

It was president Roosevelt’s achievement that the ideas set out in the Atlantic Charter became the blueprint for the next International order. This required a combination of vision, strategy, results on the battlefield, and negotiation skills.

It should be reminded, at the time of the declaration (14 August 1941), the United States was not (yet) actively involved in the war in Europe; Japan had not yet attacked the US.

This state of affairs shows the crucial importance (and utility if executed correctly) of a strategic vision, and the need to create – as soon as possible – a “narrative” – a set of consistent objectives – other states can relate to, to focus war-activity.

Systemic wars are about values and rules that will underpin the next international order; the post-war world. The (strategic) narrative must explain what the fighting is about, and why sacrifices are made. A “good” narrative not only provides purpose and focus, but also justification.

However, it is one thing to have a vision, and clear and consistent goals, it is another thing to realize this vision, and to ensure the war-goals become institutionalized in the next order.

This is what Roosevelt also achieved: Roosevelt also played a crucial role in the realization of the ideals that were laid down in the Atlantic Charter. Through cunning exploitation of battlefield results, bargaining (Teheran, Yalta, Potsdam, and a series of other conferences) and the creation of a network of allies, his vision was realized.

Roosevelt realized that colonialism undermined American interests, and that the suppression of other populations was not right, and could not longer be supported.

Churchill had no other options, and Roosevelt realized this. (This can be considered an (always ignored) dark side of the special relationship with the United States the United Kingdom claims until today.

The United Kingdom – and later France – were rewarded with a permanent seat (and veto-right) in the Security Council of the United Nations. Not only were thereby certain desires met of these two (“reduced”) Great Powers but was “Europe” also integrated in a (now) global state system.

With this “move” – inclusion of these Great Powers in the Security Council – the stability of the global system was better ensured. Also ensured Roosevelt that the United Nations would be dominated by like-minded states with (more or less) similar interests as the United States.

This quite painful process for the United Kingdom – from most powerful Great Power in the world for centuries, until 1940, to diminished Great Power in 1945, and eventually to just one of 28 member states of the European Union – also explains the (misguided) idea of Brexit, which is nothing else than an effort to cling to Great Power status and (at least some) global influence, in a world that has changed dramatically over time.

In the next article in this series I discuss privileges victorious Great Powers typically award themselves with.