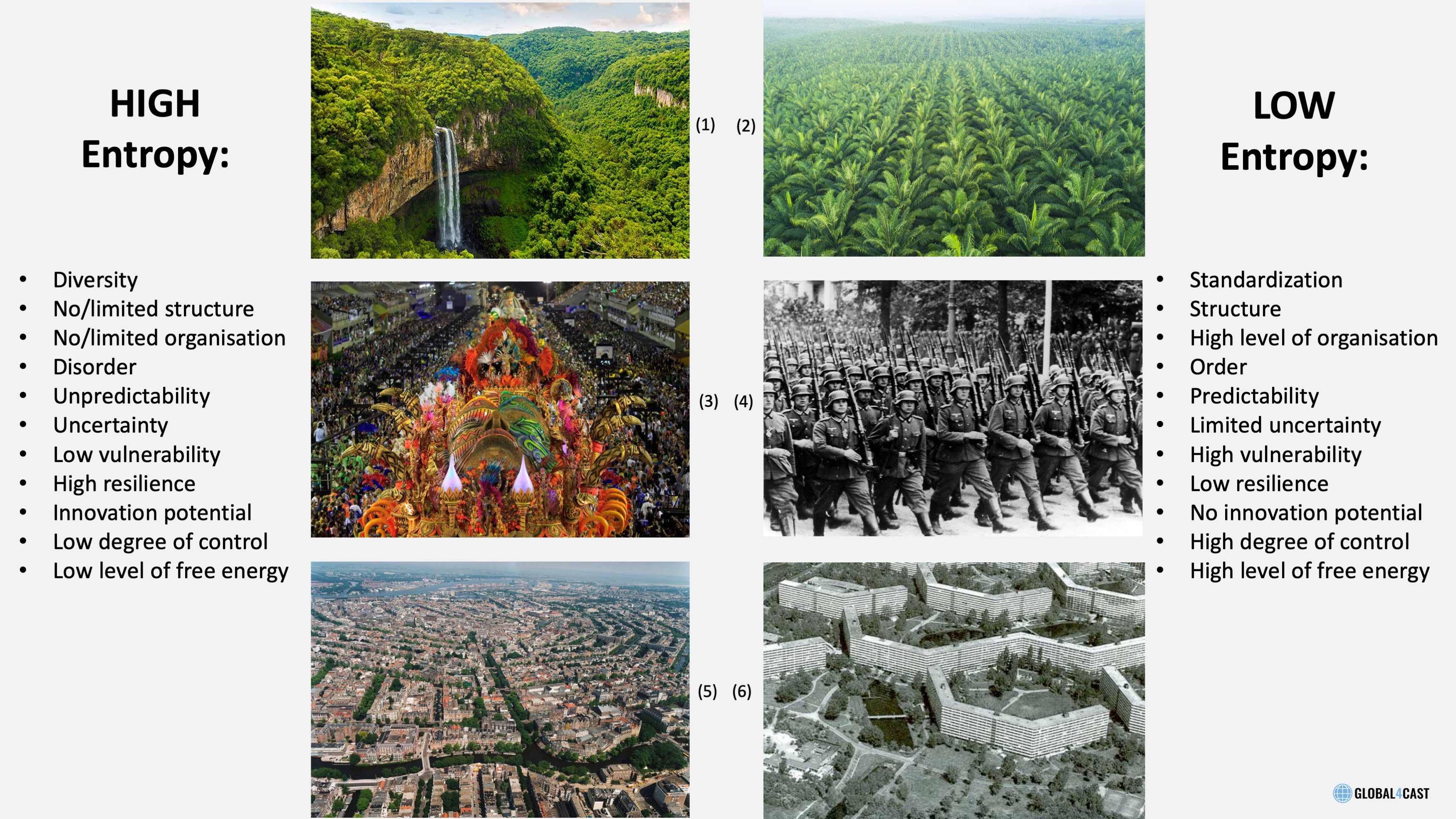 In this article, I discuss radicalization. The degree of radicalization of a social system and its level/amount of entropy are closely related.

As I explain in my research, all natural systems (including social systems) “contain” a certain amount of entropy. Entropy and entropy-producing irreversible processes are generally thought of as agents of disorder. But in Modern Thermodynamics – as Prigogine and Kondepudi argue – under far-from-equilibrium conditions, irreversible processes are considered “the drivers of self-organization and order we see all around us in Nature”.

Entropy is essential for a system’s viability and ability to adapt; but it requires regulation.

All irreversible processes – which include all natural processes (interactions, exchanges and transformations) – produce a certain amount of entropy (as “byproduct”). Entropy – like energy – is a physical property of a system and is denoted with the capital letter “S”.

It can be said (but this is a simplification) that the total energy (E) of a system is the sum of its free energy (F, energy that can be put to use) and its entropy (S):

Entropy has certain characteristics, as I explain – visualize – in below figure.  Systems can have different levels (amounts) of entropy; this level determines certain key-properties/characteristics of the system.

For a system to be viable, it must be in the viable region; “between order and disorder”, as visualized in below figure.

This tendency can be attributed to responses of increased entropy(-production) in the System and societies, during HCR’s, caused by a decrease in non-systemic kinetic activity KA (war).

In case of certain societal/state conditions, typical societal and state responses to contain and reduce entropy – that is tensions, uncertainty, etc. – are constantly reinforced. These responses can (start to) dominate social and political dynamics.

In case of radicalization, entropy is “pressed” out of the system – society – and consequently uncertainty decreases and predictability increases. This requires a high degree of state- and/or ideological control. This control goes hand in hand with a process of “standardization” – e.g. with an increase in racism and increased intolerance – which then negatively affects the system’s (society’s) innovation potential; consequently, the society concerned becomes more vulnerable and less resilient. These are the typical characteristics of (the process of) radicalization.

The present increase in entropy(-production), means an increase in uncertainty and disorder. To maintain a certain order, states and societies develop more extreme ideas and policies; this typical response produces more volatile social and political dynamics.

Processes of radicalization – mostly still in their early stages – can now be observed, in some society’s that have difficulty regulating their entropy(-production): Building walls (increased control), organizing military parades (standardization, control over free energy in society), increased racism and intolerance (standardization), increased information-control, etc. are disturbing signals, that point to a tendency to radicalize, if not checked.

In case entropy S is reduced, the amount of free energy (F) – energy with a certain utility (e.g. military capabilities) that can be put to use for certain “work” (war, to increase control) – increases. As I mentioned: E = F + S, and when S decreases, F necessarily increases (because E – at least in a closed system – is constant).

It is no coincidence that low-entropy societies/states that are already radicalized to a certain degree, always amass (more) military capabilities (that is free energy). Nazi-Germany – but also North-Korea – are typical examples. The Soviet-Union (1922-1991), is another example.

Typically, radicalized societies/states collapse at a certain point: Because of their “over kill” of military capabilities (free energy), they lack the ability to adapt, because they lack diversity and innovation potential (other than directed at increasing their military capabilities (free energy)). These states/societies are not in the viable region (see figure), but over-structured.

The Soviet-Union’s collapse (eventually in 1991), was a controlled collapse, while Nazi-Germany’s collapse and the collapse of ISIS/ISIL (ISIS is a radicalized community) were accompanied by the release of the amassed free energy, that was utilized (from their respective perspectives) with support of the extreme “supporting” ideologies these social systems had developed.