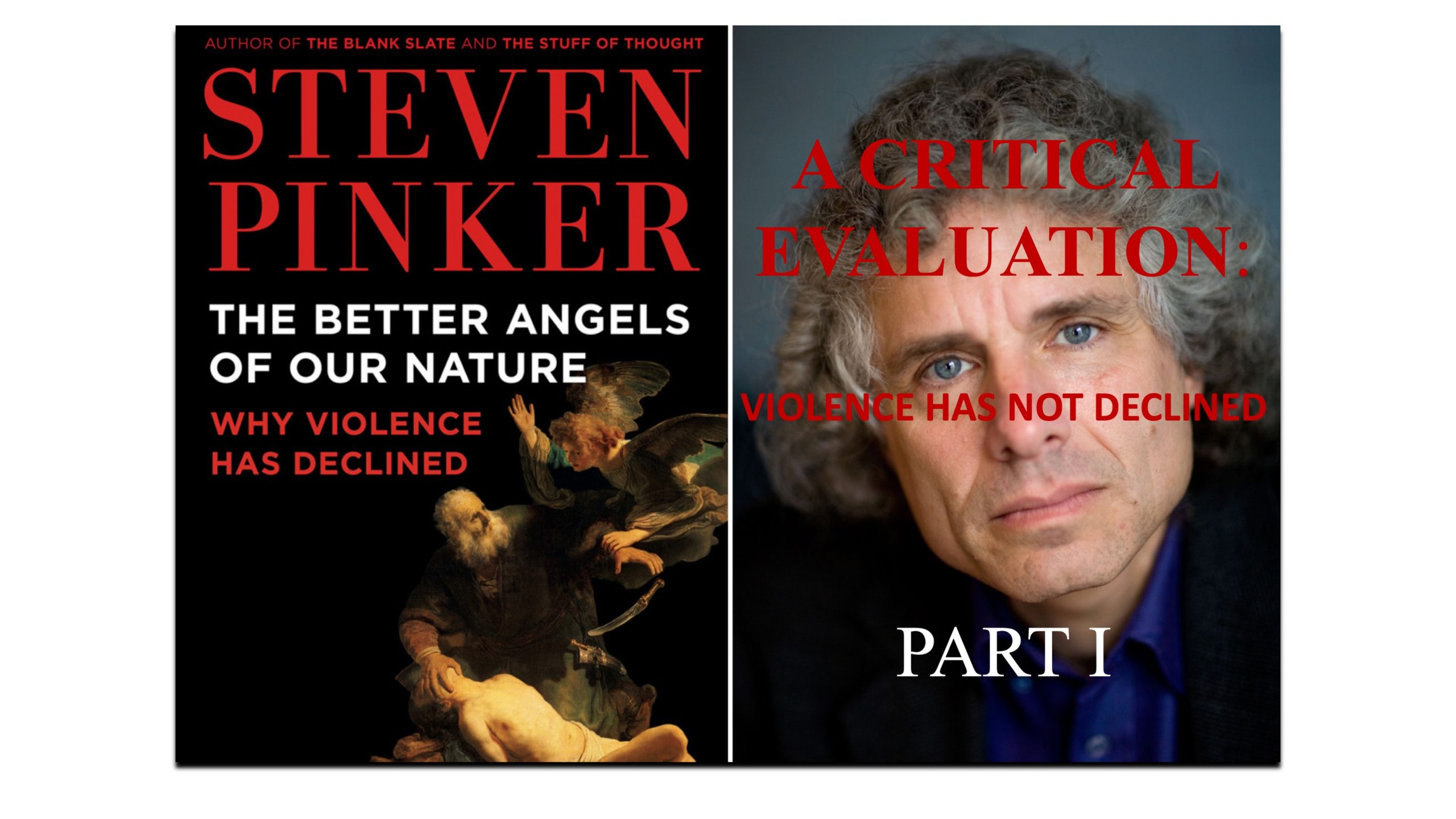 In a series of articles, I discuss a book by Steven Pinker with the title: “The better Angels of Our Nature“. In this book, the author argues that violence in the world has declined both in the long run and in the short run and suggests explanations as to why this has occurred. It is a sympathetic idea, but Pinker’s claim is not properly substantiated, as I explain.

This is part I of this series.

This paper was initially published on May 10th, 2017. The observations and arguments presented in this paper are confirmed by my latest research “On the Thermodynamics of War and Social Evolution” (2019). The latest research provides a (more) in-depth scientific explanation.

In this series of articles, I evaluate Steven Pinker’s study with the title “The Better Angles of Our Nature. A history of violence and humanity”. In this study, Pinker optimistically argues that ‘violence of kinds’ is decreasing, and that we are now experiencing a ‘Long Peace’. I show that as far as war and the war dynamics of the System are concerned, this is not the case; to the contrary, the System is currently producing a fifth – a first global – war cycle. I show that Pinker’s optimistic interpretation is based on a wrong interpretation of war data, and the absence of a scientific theory: Pinker – and other historians – failed to identify that the System regulates its energy-state through an emergent self-reinforcing dynamic, consisting of accelerating war cycles with remarkable consistent properties.

Our understanding of the war dynamics and development of the System still are very rudimentary; until now we failed to recognize that the System is highly deterministic. Our limited understanding of the System’s (war) dynamics and development contributes to the dire condition of the System, and our impotence to take control over the System. Humanities experience with war – our inability to take control – has caused a condition of collective learned helplessness. A paradigm shift is urgently needed to improve the quality of historical research and policy advise.

In his book with the Title “The Better Angels of Our Nature. A history of violence and humanity” Steven Pinker optimistically argues that “we may be living in the most peaceful time in our species’ existence” and argues that “despite the constant stream of news about war, crime and terrorism, violence of all kinds has been decreasing”. “No aspect of life is untouched by the retreat from violence”, according to Pinker and that we now witness a ‘Long Peace’, a condition that can be attributed to “the better angels of our nature” (1).

The study was published in 2011. Although ‘the world’ and its (war) dynamics have changed dramatically in the meantime – as my research predicts (2), (3) – Pinker’s study is meant to stand the test of time, as he argues himself.

In his analysis, Pinker focuses on “violence at many scales, in the family, in the neighbourhood, between tribes and other armed factions, and among major nations and states”. Pinker observes that since the Second World War (1945) “the global trends in almost all of them, viewed from the vantage point of the present, point downward”.
Pinker argues that since the Second World War a sharp decline can be observed in the frequency and destructiveness of wars.

I argue that Pinker’s conclusions – at least his conclusions regarding the war dynamics of the System – are wrong and based on a misreading of the statistics he used for his research.

Pinker – as well as other scientists and historians – have failed to identify: (1) cyclic patterns in the war dynamics of the System, (2) the ‘underlying’ laws and mechanisms that determine and shape these dynamics, and the development of the System, and (3) the purpose of war dynamics, to regulate the tension levels in the System.

Pinker and other historians and social scientists, miss the crucial point, that deterministic laws provide a ‘playing field’ – a domain – for social development and events (that to a degree are probabilistic/contingent). These ‘underlying’ laws and mechanisms determine and shape the (war) dynamics and development of the System. Social developments – including historical processes – can only be understood and be correctly interpreted, when this ‘underlying’ deterministic domain – and its interaction with probabilistic events – is taken into consideration.

Pinker’s conclusion and optimism are – regretfully – not justified. His study “The Better Angels of Our Nature. A history of violence and humanity” (1), like Francis Fukuyama’s book “The End of History and the Last Man” (4), and the ‘claims’ both scholars make, are the result of the same shortcoming: the absence of a scientific framework. The result is not a thorough scientific analysis, but – I regret to say – wishful thinking.

In this paper, I present an analysis of Pinker’s research and present my arguments.

The introduction of this paper is followed by a short overview of Pinker’s observations and conclusions related to the war dynamics of the System. In the chapter that follows, I discuss my research, and explain the discrepancies between Pinker’s and my own findings. In this chapter I refer to the appendix of this paper, where I discuss Pinker’s analysis in more detail.

In the final chapter – with the title: ‘Paradigm Shift’ – I discuss, the reasons why historians and social scientists have failed – and still fail – to identify patterns in the war dynamics of the System, and in the relationship between war (and war dynamics) and the development of the System.

In my research, I show that physical laws also apply to social systems and their dynamics, and that a paradigm shift is urgently needed to give historical research a scientific footing. A ‘narrative approach’ to the analysis of historical processes and developments cannot serve as a substitute for the scientific method. The (generally) poor quality of foreign policy advice is also related to this fundamental shortcoming. I argue that my research provides ample proof that the application of the scientific method – in combination with new insights in complex systems and networks, and the application of concepts related to theoretical physics – enables us to start understanding the functioning of the (international) System, and the role we – humanity – play in the dynamics of this System.

Pinker explains, I quote: “The goal of this chapter is to identify the components of the long-term trends in wars between states. I will try to persuade you that they are as follows”:

Pinker’s four components of the long-term trends in wars between states are:

• No cycles.
• A big dose of randomness.
• An escalation, recently reversed, in the destructiveness of war.
• Declines in every other dimension of war, and thus in interstate war as a whole.

Pinker is not able to persuade me that his conclusions are correct, to the contrary. Based on a detailed analysis of his study (see appendix), I come to the following conclusions concerning his four components of long-term trends, Pinker argues he identified:

(1) Cycles do exist. The System – Europe – produced four accelerating and remarkably consistent war cycles during the period 1495-1945, that accompanied a finite-time singularity dynamic that was instrumental in regulating the energy-state of the System. The System collapsed in 1939. By means of the fourth systemic war (the Second World War, 1939-1945) that followed the collapse, simultaneously two non-anarchistic structures were implemented in Europe (that merged into one, following the collapse of the Soviet Union in 1991), and a first international order at the global scale of the (now) global System. The global System is now producing a first global war cycle, that could well be the first war cycle of a second – now global – finite-time singularity dynamic, that will also be instrumental in the process of social integration and expansion of the global System.

(2) It is not randomness. The war dynamics and development of the System are determined and shaped by underlying deterministic laws and mechanisms. The randomness Pinker observes, is mostly the manifestation of chaotic war dynamics that are deterministic – but also intrinsically unpredictable – in nature. Randomness and probability are restricted to (contingent) dynamics and events, in the contingent domain of the System: But there only is latitude for contingency as long as deterministic laws are obeyed (2). Deterministic laws – for example – determine the start-time, duration and severity (battle casualties) of systemic wars, while ‘only’ the justification to fight these wars and how we fight, are left to our ‘human’ discretion. Our free will is much more limited than we think it is, and as far as free will exists, we do not use it wisely; we let ourselves be guided by selfish (interacting) self-fulfilling prophecies, that ensure we obey the laws that apply to the dynamics of the System.

(3) The destructiveness of war is not reversed, to the contrary. See also above. If we do not take control of the self-organized – potentially self-destructive – war dynamics of the System, which have their autonomous momentum, war will become increasingly destructive, and expand to a global scale of the System.

(4) There is No decline in any dimension of war. See above.

There is no ‘retreat from violence’ as Pinker argues (1). To the contrary: We obey the destructive regime the System imposes on us, in its System’s efforts to regulate the energy state of the System, and optimize ‘collective’ survival.

Humanity’s nature has not fundamentally changed; that would be remarkable given the time scale evolutionary process work on; modernity can still not compensate for humanity’s limitations. The current developments in the System are powerful reminders of these limitations.

Pinker argues that six trends can be observed (1). The Long Peace Pinker refers to (the fourth trend), he argues took place after “….the end of World War II. The two-thirds of a century since then have been witness to a historically unprecedented development: the great powers, and developed states in general, have stopped waging war on one another. Historians have called this blessed state of affairs the Long Peace”. As I explain in this paper, this is an incorrect observation, based on misinterpretation of war data, and unawareness of the presence of four accelerating war cycles, and a fifth (now global) war cycle that is unfolding.

I regret to say that Pinker’s “New Peace” does not exist: A new series of (accelerating) war cycles – but now at a global scale of the System – is in the making.