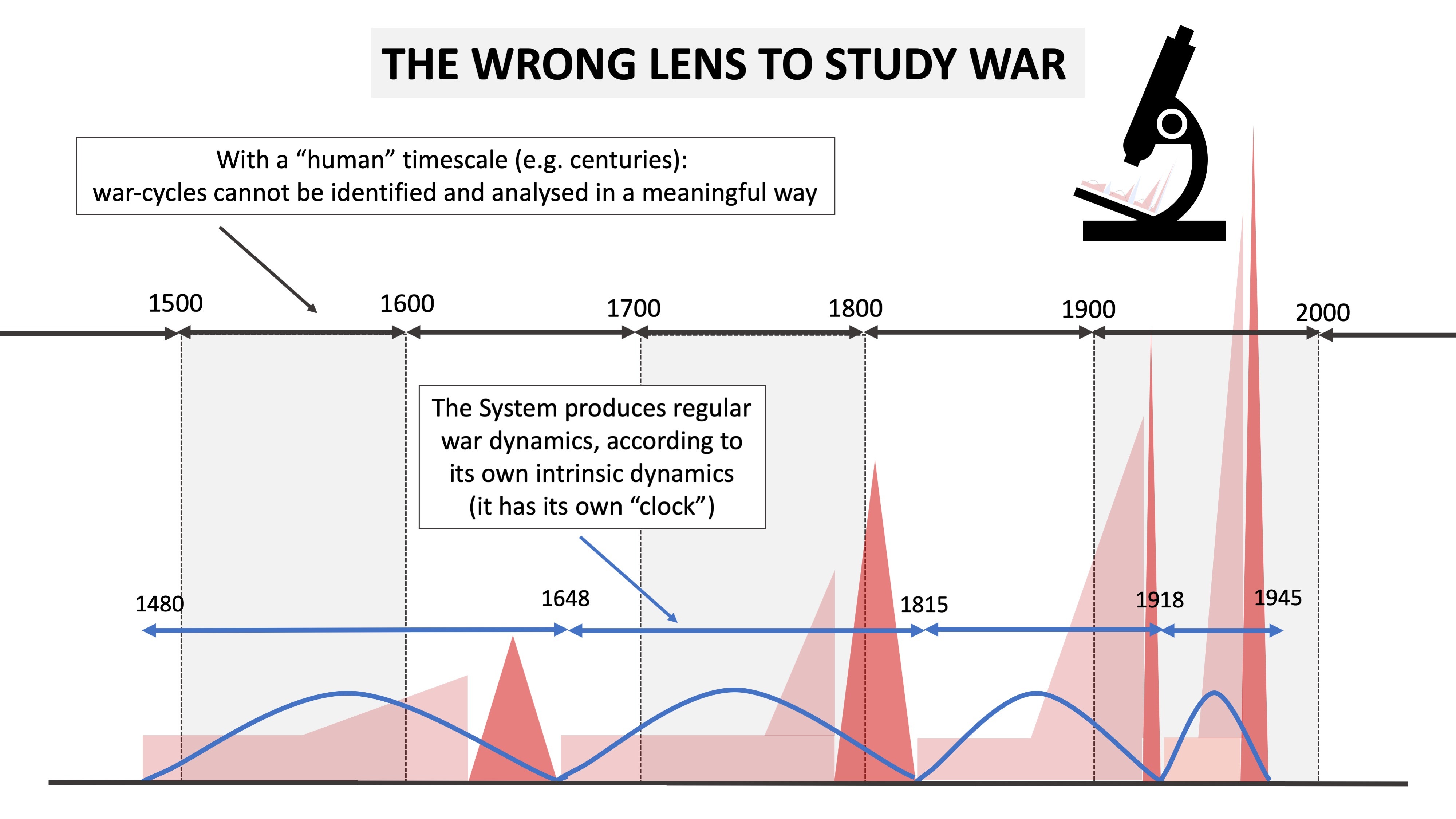 In above figure, four accelerating war cycles are shown that can be identified during the period 1480-1945. Each cycle consists of a relatively stable period, followed by a systemic war (in red). The four accelerating war-cycles constitute a dissipative structure that was instrumental in a phase transition with two complementary effects in 1945: (1) Equilibrium in Europe (albeit with a delay until 1989), and (2) upscaling of the European state system to a global state system. The four accelerating cycles reveal the rhythm of the System, produced through its internal dynamics. These cycles should be used as the units of analysis of war dynamics. Instead, historians typically used “man-made” centuries and periods of 50 years in their efforts to identify regularities and patterns (highlighted in grey in above figure); consequently regularities were not identified, or instead artificial – nonexistent – trends that are the result of the wrong (e.g. century) “lens” that was used. Steven Pinker‘s analysis and optimistic observations are based on the wrong lens.

There are various reasons why historians – like Steven Pinker, Jack Levy and David Singer – did not identify regularities and patterns in the war dynamics of the international system. These reasons include:

– A too short time perspective has been used. To identify the rather long war cycles, a long-term perspective is required. Historians have the tendency to focus on particular events.

– The size of wars needs to be redefined. Historians typically use the number of casualties in wars, as an indication for their size. However, war size defined as the fraction of the system that is involved in war activity, is a more accurate indication.

– Man-made centuries and periods of 50 years are typically used as units of analysis, instead of the lifespan of natural cycles. During the period 1480-1945, the System – at that stage it was a European system – produced a dissipative structure, consisting of four accelerating war cycles. This dissipative structure was instrumental in a phase transition with two complimentary effects: (1) The establishment of an equilibrium in Europe (albeit with a delay caused by the Cold War), which provided the basis for European unification, and (2) the upscaling of the European state system (which self-destructed during the fourth systemic war (the Second World War, 1939-1945)) to a global state system.

Data-analysis shows that the global state system started producing a second (now global) dissipative structure in 1945, which is also accompanied by war cycles (presently, data-analysis suggests we are in the end stage of the first global cycle that started in 1945). The emergence of a second (global) dissipative structure – of this typical dynamic – probably means that the global state system follows an identical trajectory as its European predecessor, but now to global equilibrium (meaning that state structures no longer exist).