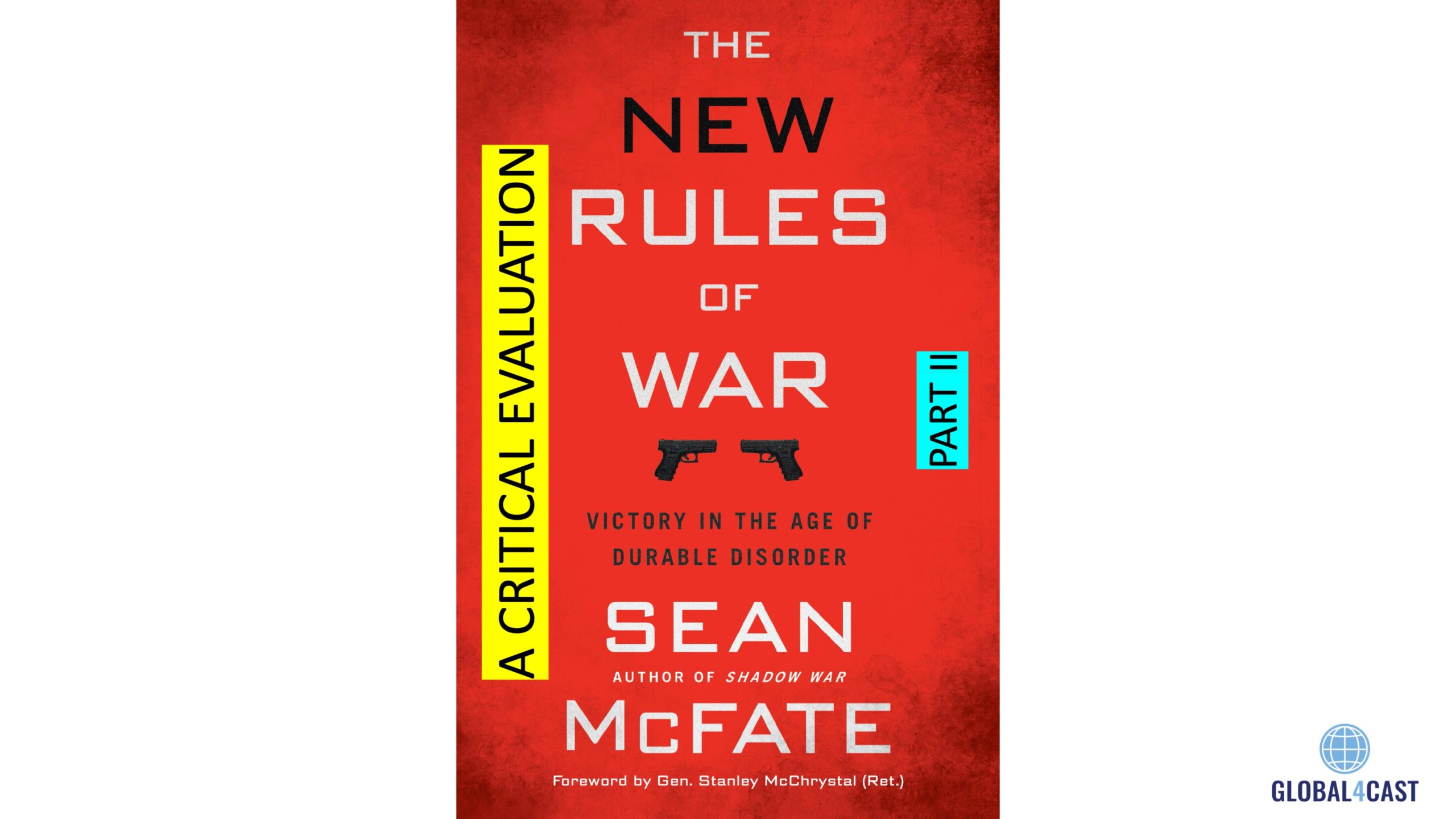 Is a series of articles, I discuss McFate’s book. This is the second article.

In the first chapter with the title “Strategic Atrophy”, McFate starts with the question “Why has America stopped winning wars?”

Since the Second World War – McFate observes – “the American military has experienced nothing but loss”. Winning is about achieving “the objectives you set at the beginning”, and “If the answer is no, then you can’t claim victory.”

A relevant question that is ignored by McFate – also in the other chapters – is if the American objectives that were not achieved since 1945, were realistic in the first place. This question concerns the (political) utility of force.

McFate continuous: “This isn’t just happening to the United States. Over the last seventy years, a disturbing trend has emerged: The West has forgotten how to win wars”. The West has the best troops, training, technology, equipment, and resources – so what’s the problem?”

McFate then discusses – superficially – the point of view of various experts and argues: “The problem is not the troops or resources – the West has the best. It’s the way we think. The problem is our strategy. We lose because of our own strategic incompetence.” He continues: “… we do not know what war is, and if we do not understand it, then we cannot win it.”

McFate knows and understands, he claims. He argues it is a “strategy” problem; I do not agree with this simplistic assessment, as I will explain later. Furthermore, also a misunderstanding: “The West” does not exist (anymore), also thanks to “America First”.

According to McFate, “Western militaries have become paradigm prisoners of something called “conventional war” strategy. It’s modeled on World War II …”. But “… no one fights “conventionally” anymore – except us. The West is losing because it suffers from strategic atrophy.”

Wars will not be fought conventionally and “Conventional war is dead”, McFate argues; “Modern conflict is governed by new rules, ones our enemies have grasped but we have not … we will suffer a big defeat.”

McFate then makes a statement that also seems to underpin a more political perspective: “As an American, I loathe seeing our national honor tarnished by low-level enemies. This is not what past generations sacrificed for, and the United States deserves better. So does the world.”

I agree a lot of people deserve a better world, but America – America First – will not make it a better place.

McFate also contradicts himself: McFate typifies strategically superior enemies who won all wars since 1945 – and who do not have the best troops, training, technology, equipment, and resources, according to McFate – as “low-level enemies”. Why are these enemies “low-level”, when they win all wars, with inferior troops, equipment, training etc.?

In his book, McFate extensively refers to Sun Tzu, as an example to follow; but McFate seems to have missed an important advice of Sun Tzu: According to Sun Tzu, humbleness is a virtue: “Seem humble to fill them with conceit”; “them” is the enemy. That is what America’s enemies have exploited: American conceit; the American assumption that they know what the world deserves (more America).

McFate continues: “The New Rules of War will help remedy the West’s strategic atrophy….. People who claim they know how to win future wars are usually wrong. This book is different. Undergirded by scholarship and real-world experience, it identifies trends that have existed for the past seventy years and will continue into the next seventy.”

McFate argues that war is unavoidable, but that “The good news is that we can still win”. According to McFate we must recognize that “the more important challenges are systemic. Worldwide volatility is getting to the point that chaos threatens. If we are to endure, we must learn how to win in an age of disorder.” “The twenty-first century is maturing into a world mired in perpetual chaos, with no way to contain it.”

I agree with McFate that war seems to be unavoidable, but for different reasons; war is (to a high) degree autonomous system behavior, generated by the anarchistic state system. However, there are “leverage points” that could be used to breach this autonomous behavior; but collective and coordinated action is required.

McFate also uses the word “chaos”, but with a different meaning. In my research, I argue that the war dynamics of the System have chaotic characteristics, and that they are consequently intrinsically unpredictable. That is a different thing.

McFate speaks of “the emergence of a new global system that I (McFate) call “Durable disorder”, which contains rather than solves problems. This condition will define the coming age. … we will see wars without states … Winning will change, and victory will be achieved not on the battlefield but elsewhere. Conflicts will not start and stop, but will grind on in “forever wars”…. The laws of war will fade from memory (IP: That includes McFate’s laws?), as will the United Nations …Privatizing war changes warfare in profound ways … The most effective weapons will not fire bullets, and non-kinetic elements like information, refugees, ideology, and time will be weaponized”.

War and warfare will – and already have – indeed changed. “Forever wars” exist, but – as I argue in one of the articles on this website – the fact that they are never-ending, is the consequence of misguided political and military decisions, mostly “made in America“, based on the misconception that the rest of the world is waiting for “more America”.

As I mentioned in the introduction of this article, in these summaries, I restrict myself to some superficial comments.

But in anticipation of my comprehensive evaluation, at a later stage, I would like to make the following comment: The problem with McFate’s so called “New Rules of War” is that they are in fact only a collection of trends, he observes (a word he also uses for his rules). These “trends” (actually it are not even trends) concern a variety of (mostly) unrelated subjects.

A solution to the problems and challenges McFate observes – assuming they are accurate – requires a thorough analysis, and a comprehensive set of rules and guidelines. Not a shot with a shot gun.

McFate also does not define “war”; Actually, what is war? McFate also doesn’t make a distinction between “war dynamics”, “war” and “war-fighting”, which contributes to the confusion.

Despite these shortcomings and inconsistencies, McFate makes some interesting observations that are worthwhile discussing.