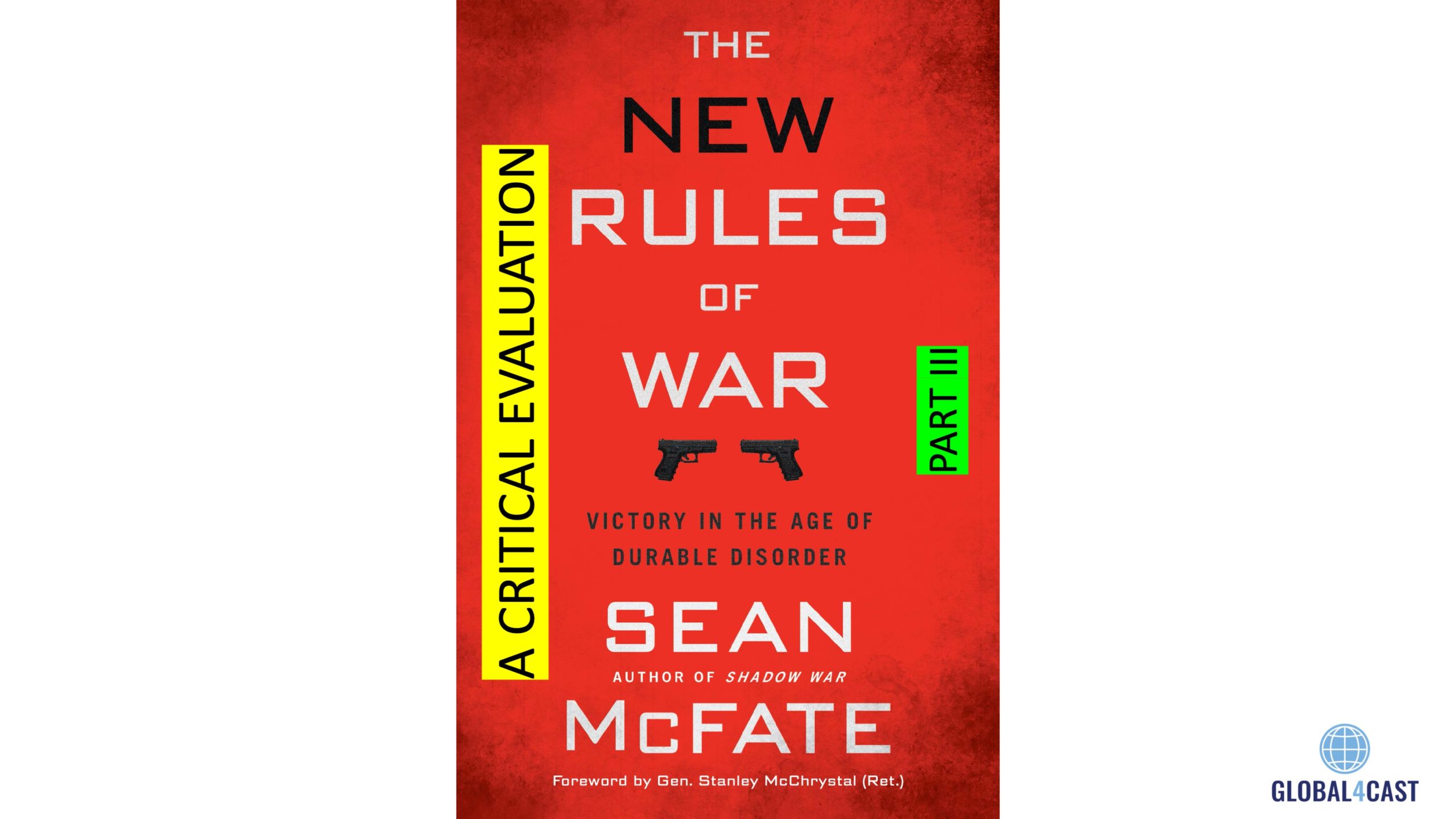 Is a series of articles, I discuss McFate’s book. This is the third article.

Although McFate’s book excels in simplifications and inconsistencies – as I will show – some of his observations are interesting. It is important to be critical about his bold statements: His book is widely read and praised: a substantiated reply is required.

In the next chapter of his book, with the title “Why do we get war wrong?”, McFate discusses “where do all those bad ideas come from?”; referring to ideas how to fight wars and what to expect in case of war.

McFate knows where these bad ideas come from: They come from “war futurists”. “These are people who dream up future war scenarios. They fill heads with the make-believe battles of tomorrow that drive strategic decisions today. Their assumptions shape Washington’s worldview about what is coming to kill us and how we should fight back. In other words, their ideas shape our current concept of war and victory. The problem is, they get it wrong – all the time. Lawrence Freedman a preeminent war scholar, surveyed modern history and found that predictions about future war were almost always incorrect.”

The point is, McFate is himself a so-called war futurist, dreaming up future war scenarios.

But he is right when he states that: “predictions about future war were almost always incorrect”. But the reason is, that war is intrinsically unpredictable (except for the timing, duration and intensity of systemic wars), and that will not change, also not with McFate’s so-called “new Rules of War”.

McFate distinguishes three types of false prophets, including “technophiles”, who are “the most deceiving war futurists”. McFate does also consider artificial intelligence (AI) a hype: “The rise of the machines will not happen anytime soon”. A dangerous and risky assumption, if you ask experts.

According to McFate, Cyberwar is a new weapon of war, not a new way of war: “Cyber is important, but not in ways people think. It gives new ways of doing old things: sabotage, theft, propaganda, deceit, and espionage”.

I am convinced that cyberwar – the Internet – is a game-changer, and not only in respect to war(fare). Stuxnet (2010) is an example: Iran’s nuclear facility in Natanz, was successfully – at least temporarily – taken out of action. Until that time such an act of sabotage could only be accomplished without resorting to physical destruction and (thus) war. War has already changed fundamentally.

Not only is an important question what the impact of cyberwar(capabilities) is on war, but also on war-fighting and on war dynamics. It is now more difficult to distinguish between a state of war and a state of “no war”, and to identify the actors that are involved in these cyber-activities (state-actors or non-state-actors, or a combination?). The Russians exploit this grey area through ideas like the Gerasimov doctrine. Through cyberwar an enhanced battlefield – that include societies – can be shaped.

Precisely because of America’s military superiority, cyberspace (in my research I also refer to as the information domain) becomes an increasingly attractive domain to compete and fight “alternative” wars.

Until (circa) 1945, war was about destroying or neutralizing the military capabilities (“armies”) of other states, and when this was accomplished, the state concerned could be subjugated: “game over”. This Clausewitzian model of war, no longer exists: Wars are no longer fought in isolated military domains: Populations, societies and communities are now directly involved, and active participants. War has transformed from a political instrument of states into political activity, also at a local level of societies. The position of the state is undermined: Providing security to its population – which is the first priority of states, from which they derive their legitimacy from their respective populations – is (further) challenged by cyber-intrusions and attacks. “Cyber” becomes the preferred domain to destabilize and fight other societies ; especially by countries like Russia. Especially democracies are easy targets.

McFate tries to overwhelm his readers with blunt statements: “If there is one lesson from the past seventy years of armed conflict, it’s this: technology is not decisive in modern war. Technophiles remain inexplicably oblivious to this fact. Since World War II, high-tech militaries have been routinely stymied by luddites: France in Indochina and Algeria, …. the USSR in Afghanistan…. the United States in Vietnam, Iraq and Afghanistan“.

This statement is wrong: Technology – when applied correctly, and as an integral component of a comprehensive strategy – can be decisive; obviously the United States was not able to leverage its technology, assuming that their political ambitions and strategies were – and are – viable in the first place.

Before introducing his first “new rule of war” – conventional war is dead – McFate ends this chapter with the following observation: “Durable disorder is here, and those who know how to fight in it will. The West does not, and it is on the path to defeat. Our strategies and weapons are deadly – to us (IP: The point is: not only to Americans). We need to catch up to our enemies and learn to play by war’s new rules to win. Or we will die.”

No lack of drama.

It is important to note that a problematic idea – a misguided idea – underpins the statements and new rules of war of McFate, and the “American way” in general – including their heavy (only) reliance on hard power: I refer to the idea of American exceptionalism; which includes the notions that “the United States’ history and mission give it a superiority over other nations” and “the US has a unique mission to transform the world”. The idea of American Exceptionalism and America First are closely related.

When states – and societies – act from these type of assumptions and then claim all kinds of privileges, we better beware.