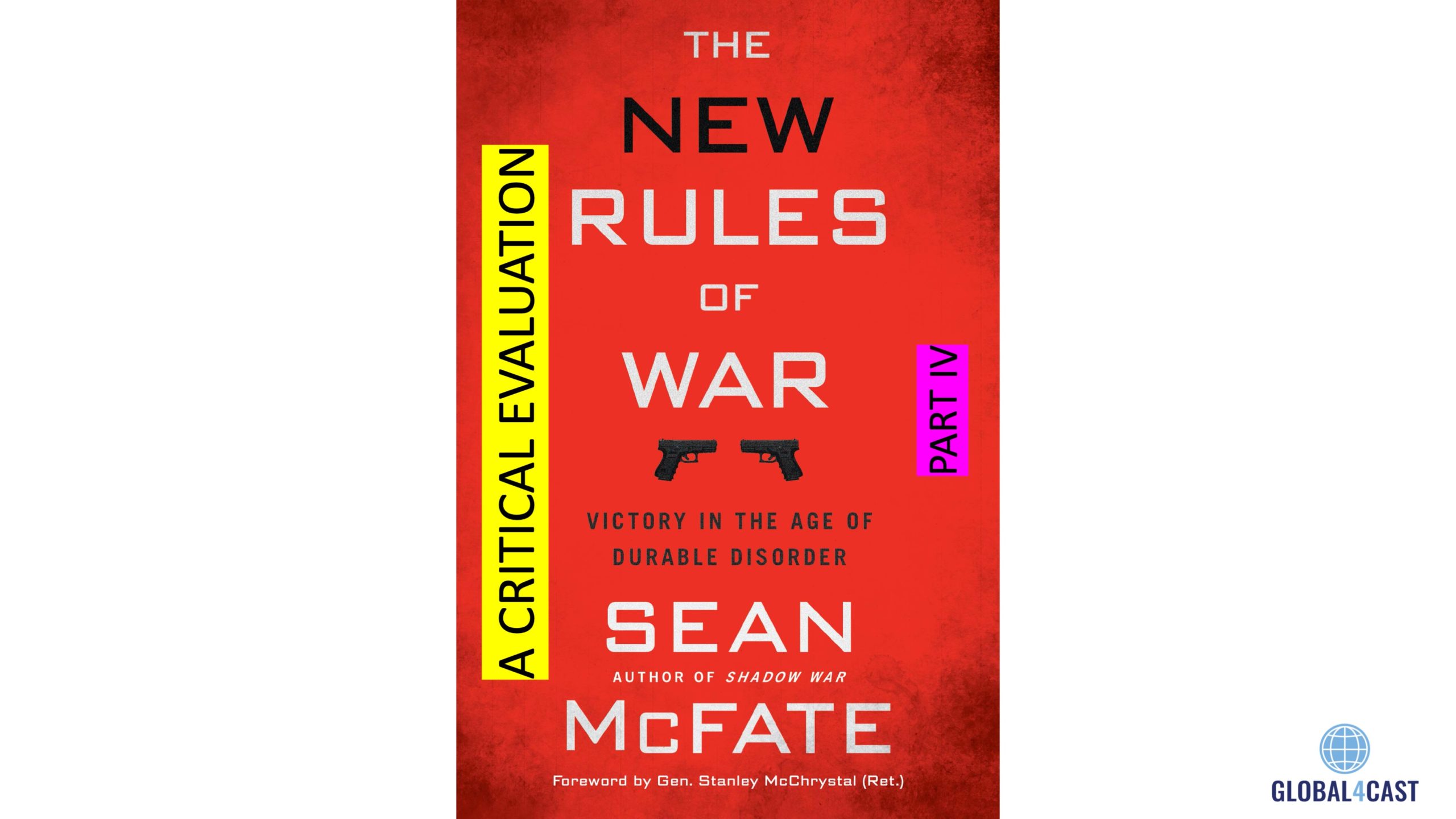 Is a series of articles, I discuss McFate’s book. This is the fourth article, in which the first “New Rule of War” is discussed: “Conventional war is dead“, at least according to McFate.

According to McFate there is a difference between war and warfare: “Warfare is how wars are fought, and it is always changing. But the nature of war never changes”. The “nature of war” is according to McFate “timeless”, and is defined as “the organized violence that means to impose the will of one on another”.

According to McFate, “People today confuse war and warfare, and this leads to big problems” and “… warfare now, for the West, it’s called conventional war”.

The point here is that McFate himself makes a wrong distinction, and causes himself problems with it. Indeed, warfare is about war-fighting, and how – by what means, tactics and technologies, etc. – wars are fought.

But, the definition McFate uses for – what he names – the nature of war is in fact concerned with the instrumentality of war – its utility – as defined by Von Clausewitz.

Von Clausewitz definition is a normative definition: He explains where wars should be fought for; they should be aligned with political objectives: In short: “War is politics by other means”. This particular perspective of war – codified by Von Clausewitz, based on his experiences with and observations of the Napoleonic wars – is closely related to the process of state formation that took place in Europe, at the time. (No: Clausewitz is not timeless).

What has remained unchanged is the destruction and suffering war brings, in that sense is war timeless.

But even in this respect, there could be some developments: Cyber war – which can be non-lethal could maybe even change that.

McFate argues that “conventional war is actually a type of warfare, and it’s how the West likes to fight”, and that World War II is “the West’s model for armed conflict”. “World War II remains paradigmatic for experts, too, who view its style of warfare as timeless and universal”.

When discussing war and warfare, etc. these distinctions I just mentioned, matter. This are not just semantic discussions, because they touch on the essence of the discussion that McFate wants to have.

McFate continues with his remarks: “Conventional war is state-on-state fighting in which the primary instrument of power is brute force and battle determines everything. It’s a military-centric vision of global politics….”. “The high priest of conventional war theory is Carl von Clausewitz”. (In fact, McFate should speak of conventional warfare (not conventional war) if he wants to be consistent. The term “conventional war” is sometimes used to make a distinction with nuclear, biological and chemical (ABC) warfare).

Contrary to what McFate claims: Also, in conventional war it is not the case that “brute force and battle determines everything”.

According to Von Clausewitz, “war is politics by other means”, and in case of war, politics (that includes diplomacy) should not be “shut down”.

What McFate means with the observation that “conventional warfare is a military-centric vision of global politics”, is not clear to me. What is an accurate observation however, is that during the period 1480-1945 (see my research), war and war dynamics were instrumental in a process of state-formation in Europe, the formation of a European state-system, and eventually in achieving equilibrium in Europe (1945). War contributed to these processes.

McFate continues: “There is just one problem with conventional war: no one fights this way anymore. There is nothing conventional about it, because war has moved on. Despite this problem, conventional war remains our model, and this is why the West continues to lose against weaker enemies who do not fight according to our preferences. To win, we must ditch our traditional way of fighting, because it’s obsolete. It is neither timeless nor universal. On the contrary, conventional war has a beginning, middle and end“.

“State-on-state fighting with brute force” – that is how McFate defines conventional war – is not obsolete, as McFate without any restraint and nuance proclaims.

Although since 1945 states often deploy armies against populations, this does not mean that state-on-state war is dead or obsolete. In case of a direct Great Power confrontation in the future, state-on-state war is unavoidable, and armies will fight armies (again), using the latest available technologies.

McFate continues: Out of the Thirty Years’ war “came the Peace of Westphalia in 1648, which gave birth to a new international order, one uniquely ruled by states”. It is important to add that it was especially the sovereignty principle (applied to states) that shaped states, but also the anarchistic state-system.

This development contributed to the acquisition of a monopoly on violence (force), by states. This development worked in two directions: Not only became war increasingly a state-affair, but also could the state consolidate its power and position with respect to its population(s). The monopoly on violence also contributed to the stability of states and societies.

This state of affairs – this model – was codified by Von Clausewitz through his war theory “Vom Kriege”, based on his experiences with and observation of the Napoleonic Wars. According to this theory, the ability to destroy the military capabilities – armies – of other states, determines political outcomes. In the words of McFate: “Battlefield victory determined winners and losers”.

But, McFate correctly observes that there are problems with the Westphalian Order: “states are breaking down …. which is a “sure sign of disorder”.

However, some nuance is again required: States are also receding in Europe and are “absorbed” by an overarching political structure (the European Union). This did not bring disorder, but it brought Europe an unprecedentedly long period of stability and economic and social progress.

McFate continues: “Terrorism, ethnic cleansing, and other forms of violence by non-state actors have eclipsed conventional interstate wars. The ability of the United Nations or the West to police the situation fades each year, while non-state actors grow more powerful. International relations are returning to the chaos of pre-Westphalian days”. “This change is resetting back to an old normal. Most of history is disorder” and “The world will not collapse in anarchy but smolder in perpetual conflict, as it has for millennia.”

The observation of McFate that major changes are taking place in warfare, which are also related to the organization of the international system, is correct, but his idea that during the Westphalian Order, as he calls this period, things were much better, is not correct: During this period the use of organized force and violence reached an unprecedented scale and intensity. Force and violence were not only employed by armies of states against military targets, but also against civilian “targets”, and included the (organized) application of terrorism and ethnic cleansing, as well. Through the Westphalian order, war in Europe became total, as I explain in my research.

We must work toward a situation – organization of the (International) System – in which war becomes obsolete (as a political instrument) and is banished. Maybe a utopia, some will argue, but definitely worthwhile trying.

However, McFate is right in his doubts about for example the utility of the F-35 (in the Netherlands also affectionately referred to as the “flying laptop”. Point is, even the metaphor is not good: Most laptops are replaced by more and cheaper smartphones with more features, by alternatives more like drones actually).

The second new rule of war concerns technology: “Technology will not save us”, McFate claims.